Skip to content
0 items - $0.00
Keep me updated.
Here's my email address: We will never share your email address with anyone under any circumstances.

One of our country's and the world's most successful businessmen, a tireless patriot and advocate of veterans' causes, and a model of generosity and philanthropy, Ross Perot is placing "Before You Go" on display in his personal museum honoring our veterans in Plano, Texas — allowing even more people to hear our message of thanks to our aging veterans.

Mr. Perot served in the US Navy in 1949 and helped to establish its honor system. By 1953 he was president of his battalion class and battalion commander. In 1954 he was made a lieutenant junior grade and served in our country's armed forces until 1957.

In a letter from Mr. Perot's office dated 8/31/2011, we were informed that Mr. Perot plans to display the DVDs at his campus. An associate or visitor who is touring the Dell campus will be able to press a button and watch the DVDs on an IPad display.

Pete Wilson, 36th governor of the state of California, former US Senator, Mayor of San Diego and Chairman of the Board of the WWII Museum in New Orleans, was one of the first to express his appreciation for "Before You Go". With Governor Wilson's encouragement, "Before you Go" was placed as a prominent link on the home page of the museum's website.

Governor Wilson served as an infantry officer and ultimately a platoon commander in the US Marine Corps and has been of great assistance in helping us to be sure that we thank those who preserved our freedoms by putting their lives on the line for our country.

Comedian, Master of Ceremonies, and International Entertainer, Tom Dreesen is a Hollywood icon with more than 60 appearances on the Tonight Show and repeated appearances on the David Letterman Show. He was Frank Sinatra's opening act for more than 14 years and also worked closely with Sammy Davis, Jr., and many other of the world's great entertainers. Always at the leading edge of current events, Tom teamed with Tim Reid to form the first mixed race comedy duo of "Tim and Tom" during the 1960's

Tom is also a patriot, with a deep and powerful appreciation of our freedoms and the country that has provided them for us.

From the beginning, Tom has supported the "Before You Go" project and introduced it to many of Hollywood's famous and influential individuals. A tireless supporter of our veterans and troops, Tom has been of enormous help in spreading our message of thanks to our aging veterans.

To learn more about Tom, visit www.tomdreesen.com and be sure to check ou this wonderful new book, Tim & Tom - the story of America's first black and white comedy team (www.timandtomcomedy.com) 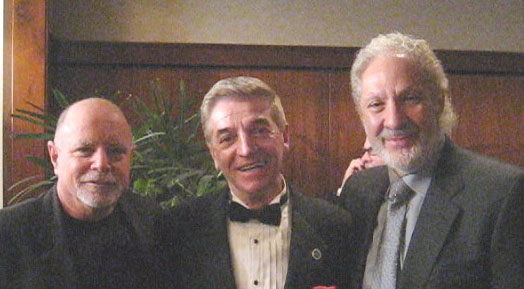 Popular talk-show host of Veterans Radio www.veteransradio.net, Bob has frequently asked Dr. Sam to be a guest on his show and played "Before You Go" for his widely listened to show. Bob consistently features heroes of past and current conflicts and is a tireless advocate of veterans' benefit programs.

Having served in the 101st Airborne Division and the 326 medical Battalion, Bob has never forgotten his fellow servicemen and women, and has been a constant supporter of the "Before You Go" project

Located in Punta Gorda, Florida, the Military Heritage Museum is dedicated to promoting an understanding and respect for the rich military heritage of the United States and the sacrifices made by our country's veterans, living and dead, emphasizing that freedom is not free.

In enthusiastic support of the "Before You Go" project, the museum has developed a mutually supportive program which allows a percentage of sponsorship funds and engagement costs associated with performances of "Before You Go" by Dr. Sam to be donated to the museum.